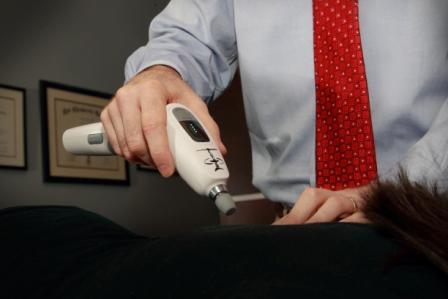 It happened again the other day. A new patient came into the office for an evaluation and chiropractic adjustment. She’d been a long time chiropractic consumer, and had visited several other chiropractors in the past. She and her family recently moved to the area, so she was looking for a new chiropractor.

I love this type of new patient. They are in essence “pre-qualified” before they walk through the door. They love chiropractic care, and want to pick up where they left off with their last chiropractor. But I’ve learned to ask one last question before they begin their care at our office.

“Are you aware that I use the Activator Method exclusively?”

“Yes, I saw it on your website,” she said. “One of my other chiropractors used it on my neck sometimes.” But, I could tell by the expression on her face she was somewhat apprehensive.

“Was it a good experience?” I asked.

“Not exactly,” she said. “It didn’t seem to really work.”

“Was the doctor certified in the Activator Method?”

“Absolutely,” I said. “Activator Methods certifies and re-credentials its doctors regularly to ensure that the technique is applied with the latest advances.”

My patient looked at me quizzically.

And there it was. I had just encountered yet another patient who thought they had an Activator experience, when in reality they did not.

In the chiropractic profession, Activator means two distinct things: 1) An adjusting instrument used to manipulate dysfunctioning joints, 2) An assessment procedure using leg-length analysis to determine where, when and when not to perform an adjustment.

While any licensed chiropractor or chiropractic student can purchase an Activator, training and certification in the use of the instrument are voluntary. This means that although most chiropractors own an Activator (or claim to use one), where, when, and why they use the Activator instrument varies immensely.

Why Does a Doctor Use an Activator Instrument?

Chiropractic is based on the principle that spinal joint dysfunction interferes with the nervous system. Therefore, chiropractic doctors test for spinal joint dysfunction and/or interference with the nervous system to determine if the person needs a spinal adjustment. Depending on the chiropractor’s clinical experience or where they went to chiropractic school, they tend to have more clinical confidence in detecting one versus the other.

If the chiropractor has more of a “joint dysfunction” perspective, he/she will ultimately rely on tests for spinal misalignment or loss of spinal joint mobility to diagnose where to make a spinal adjustment. As a result, he/she will often thrust multiple times on one area in an effort to “move the bone” or increase spinal joint mobility. Sort of like you would use a hammer to break loose or free something that is stuck.

However, if the chiropractor has more of a “nerve interference” perspective, he/she will ultimately rely on tests for interference with the nervous system (leg length analysis, neurological reflexes) to diagnose where to make a spinal adjustment. As a result, he/she will thrust one time on an area in an effort to “reset the nervous system” or restore spinal balance. Sort of like you reset a GFIC outlet by simply pushing in a RESET button.

The Preponderance of Evidence

Research and the clinical consensus of experts trained in using the Activator adjusting instrument indicate that if you are manipulating a dsyfunctional joint, one thrust per area works best. To date, over 20 clinical trials have been published comparing the outcomes of Activator Methods care to traditional chiropractic manipulation. Each and every one of these trials demonstrated equivalent outcomes regardless of which method was used. That means based on the evidence, the “Activator thing” really does work.

Ironically, in the one neck pain trial that had a higher proportion of temporary adverse effects (increased neck pain, mild radiating pain, mild headache, mild fatigue, etc.) than manual manipulation, “the analytical procedure associated with Activator Methods was not used.” That means there is at least some evidence that how and why one uses the Activator likely matters a great deal.

The Activator Method uses specific protocols to detect spinal joint dysfunction that focus on analyzing leg-length inequality and testing neurological reflexes to determine where, when and when not to perform an adjustment. In addition, the Activator Method uses only one thrust per area of contact to initiate the process of restoring spinal balance in the patient.

If you haven’t already, you owe it to yourself to try the world’s #1 instrument adjusting technique with a doctor who knows how to use it. Owning a hammer doesn’t make one a carpenter, right? Neither does owning an Activator mean your chiropractor knows how to use it effectively.

The Activator provides a controlled, fast thrust that is comfortable for the patient. Adjustments with the device are so quick and measured that the body’s muscles are less likely to resist, allowing for a more gentle and effective adjustment.
CategoryChiropractic Care
TagsActivator, Activator Adjusting Instrument, Activator Methods